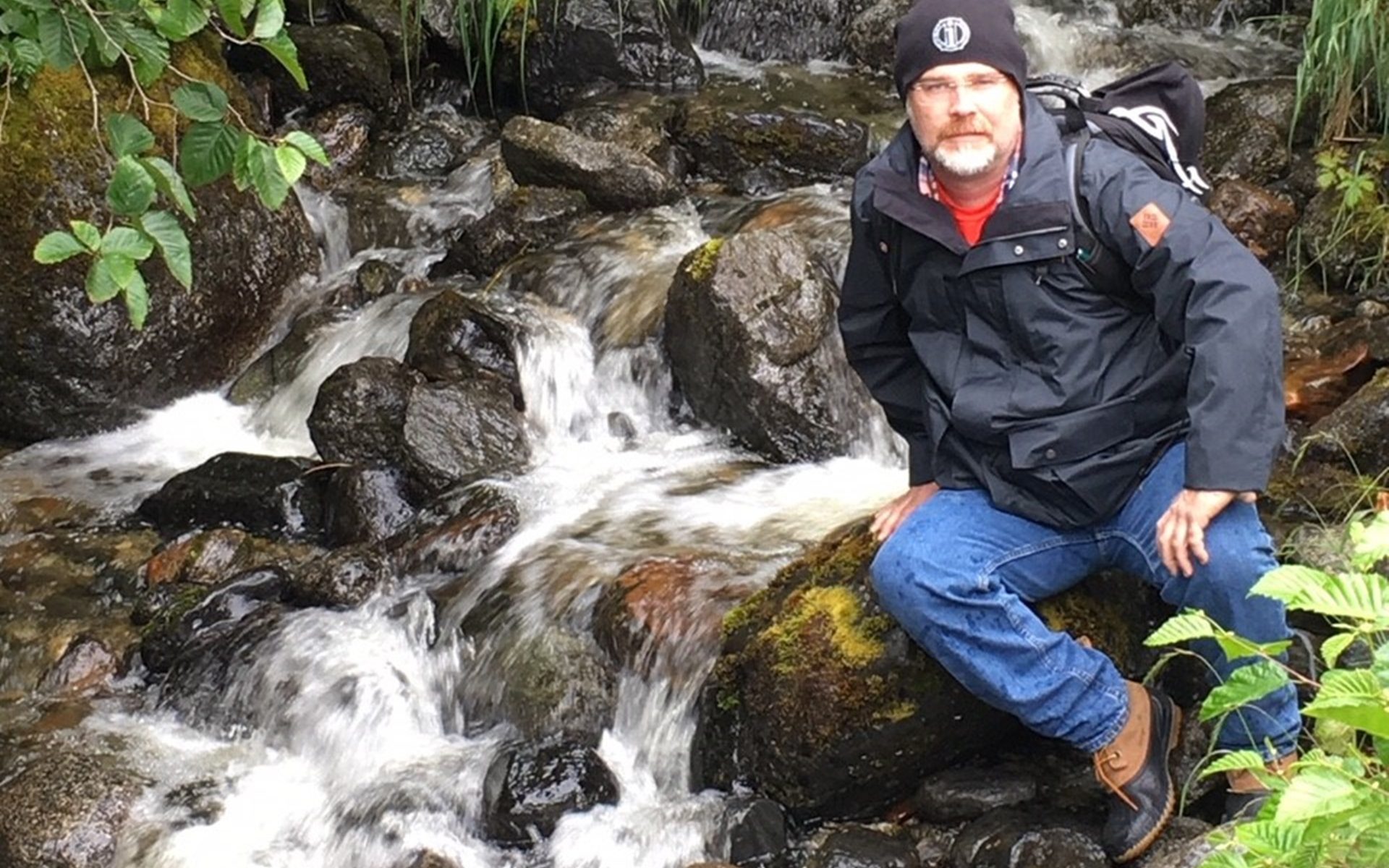 You’ve seen them cruisin’ south on I-65 and east on I-40 heading toward Nashville — those big ‘ol custom coaches with tinted glass carrying miles and miles of stories.

One such story started with J.D. Sumner who sang with Elvis. One day he asked his nephew, who was doing studio work and singing on the road as well, to build him a bus. Back in the 70s, that’s what they were called. They weren’t anything fancy … not like they are today.

Meet Jeff Sumner — custom coachbuilder and J.D.’s nephew. Jeff freely admits he “knew nothin’ about building a bus,” but that was okay because Jack Howell, a pioneer in the custom coach industry (and J.D.’s good friend), agreed to walk him through the process.

Jeff was building houses to shore up his finances, so he figured he could put his carpentry skills to work and build a bus for his uncle. With the help of Jack and his son, Matt, together they built a bus in six months. That was the beginning of his new career.

Jeff started his own business, Integrity Interiors based in White House, Tenn., in 2003 after working for Nashville Coach for 10 years.

He left the road behind and never looked back. 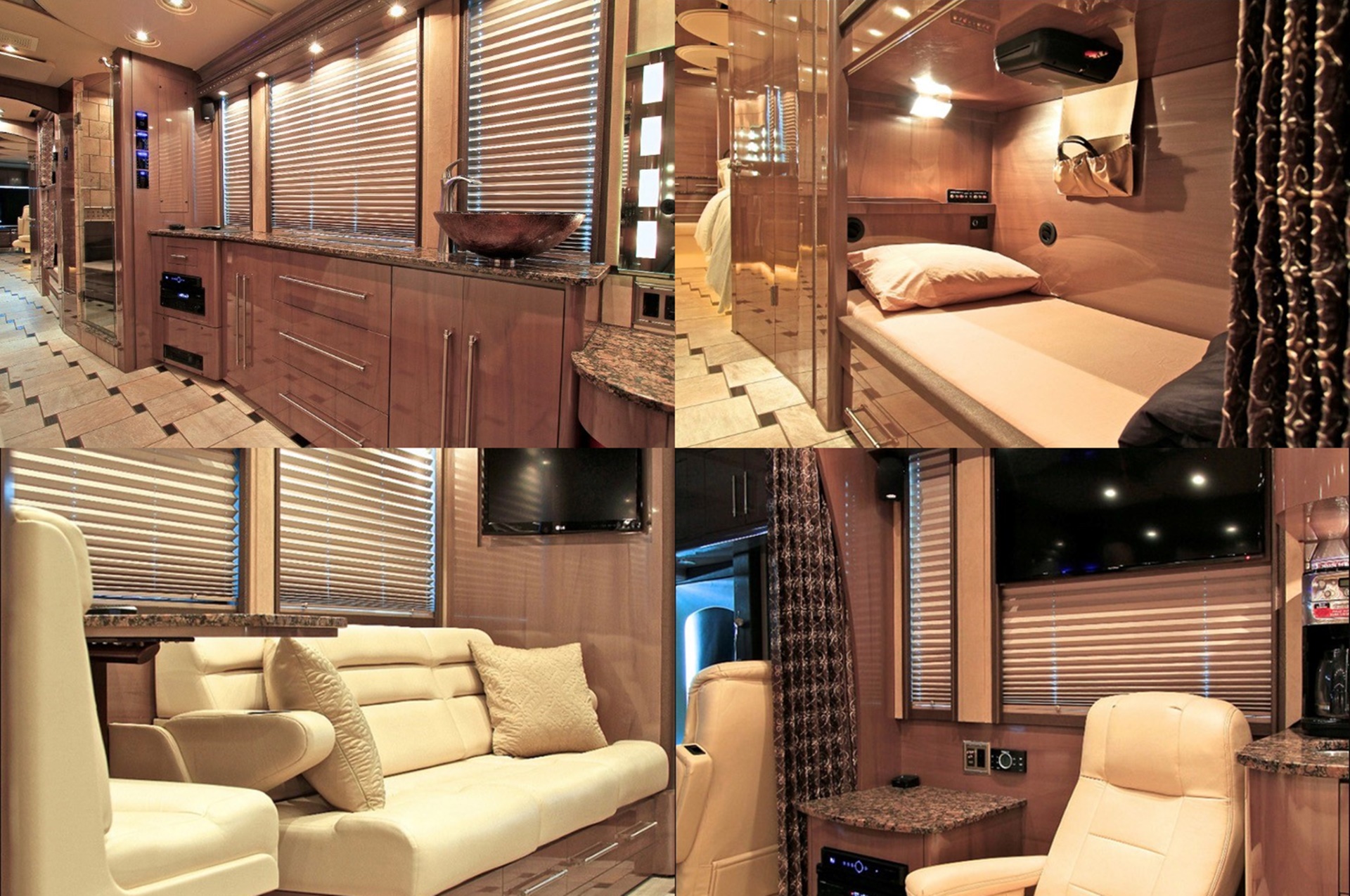 As Jeff progressed in his knowledge of buses, he became more involved in design and production. He and his team do everything in-house from framing and cabinetry to tile work and metal fabrication. Jeff serves as project manager and lead designer.

In fact, it’s the CAD design phase that excites him the most putting people’s thoughts down and watching it all come together. There are a lot of moving pieces to a custom coach project which requires a lot of thought. That’s what he likes best.

Jeff credits much of his success to surrounding himself with good people. “I have a good person for every little aspect of this process,” he said. They’re customizing three buses at once right now on site. They’ve also installed CNC machines so they can do more production at their location and are adding another building. The company has customized five coaches in the first six months of 2018.

Integrity Interiors contracts with some of the largest entertainment coach leasing companies in the country, such as

Coach companies purchase the coaches, then lease to entertainers and sports figures primarily. A few still own their coach, but it’s not like it was in the 80s and early 90s. It makes more sense to lease rather than to buy because the entertainer or athlete can lease a new coach every few years rather than spend $1 million and “driving it until the wheels fall off.”

As you might expect with custom coaches, no two are alike. For example, Jeff and his crew recently created the prototype for a mobile workout center. They designed and fabricated the interior of a 40-foot trailer to include everything a luxury home gym might have: weight machines, bicycles, treadmills, the works!

This award-winning country music singer wanted her travelin’ pals to enjoy the luxury of having their workout come to them. Her idea is to have them lease the vehicle wherever they travel. How’s that for custom convenience?

Another client was a “sports nut” so they installed 10 satellite receivers and 15 TVs. “He can watch five football games and seven with picture in picture,” Jeff said. I can only imagine the number of power panel components this vehicle would need with that kind of energy draw.

The “craziest” job they designed was an articulating bar that would rearrange to create an L-shaped bar when the slide out was extended. Their client is a heavy-metal rock star whose band bills itself as The World’s Most Notorious Rock Band.

The “most bizarre” was creating a waterfall in the coach. This popular country music artist wanted a waterfall in her big garden tub. They built it out of solid surface CorianⓇ, added a few baffles to keep the water from splashing too much and voilà. Jeff makes it sound simpler than it is, I’m sure. 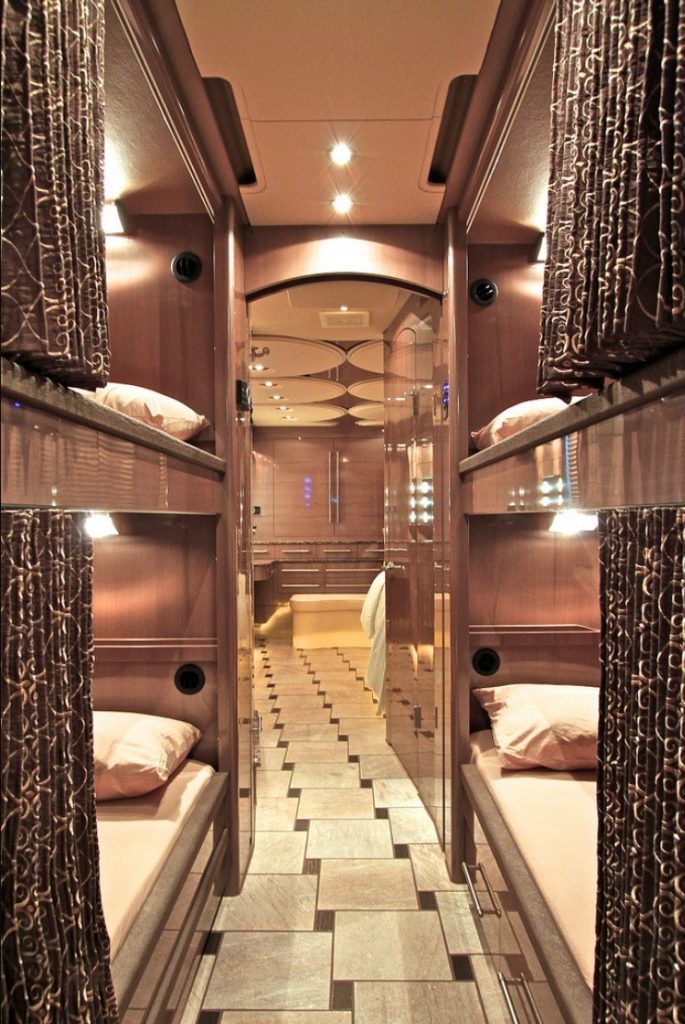 A new design he’s configured is a way for the bunks in the coach to recline while belted in. His idea initially was a way to help people feel more comfortable. Prior to the 2018 Tennessee state bus seat belt law, vehicles seating 10 passengers or fewer didn’t need seat belts installed. Now they do. So his invention took on a new level of urgency.

According to Jeff, the whole industry worked on designing an effective seatbelt application and can now boast the ability to manufacturer 12 seats with seat belts which are up to spec and meet the law’s requirements for coaches.

He’s only refused one job when a prospective client offered to pay him $200,000 in cash. He wasn’t interested in getting into the “money laundering” business, so declined the leasing company’s referral.

“I try to treat customers like family. If they can’t reciprocate, it’s not worth it,” said Jeff.

Speaking of family, Jeff calls PJ Gonzalez “his brother.” He thinks PJ, Manager of ISC, and his team are “awesome.” There’s no doubt that PJ along with Randy Seabolt are his “go-to” people when he’s struggling with a complicated design.

Even though his team is well-versed in electrical, PJ, in particular, “takes electrical systems design to a whole new level,” said Jeff.

He often brings Inverter Service Center a design concept that goes beyond what the industry has done. For example, Jeff wanted to put solar panels on the roof of a motorhome. PJ figured out the load. With this inverter system setup, the runtime was 4x better than even PJ’s original calculation! Without solar, the bus could run 5 ½ hours; with solar, the bus ran for 9 ½ hours with just the sun backing up the batteries. 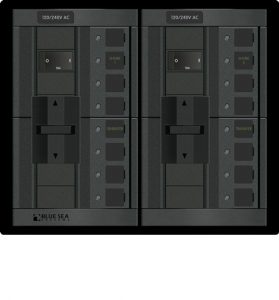 One custom coach Jeff manufactured required two shore cords due to the size of power demands for all the loads. Normally, a standard coach would have one electrical panel. In this case, he had to add another panel for transferring between the two shore cords and generator.

PJ designed the transfer panel to have the ability to run the whole coach from one cord, both cords or the generator. Of course, if you used the one cord option, load management is a must.

“His knowledge of how that stuff works is amazing,” Jeff said.

You sound pretty amazing yourself Jeff. Thanks for talking with us!